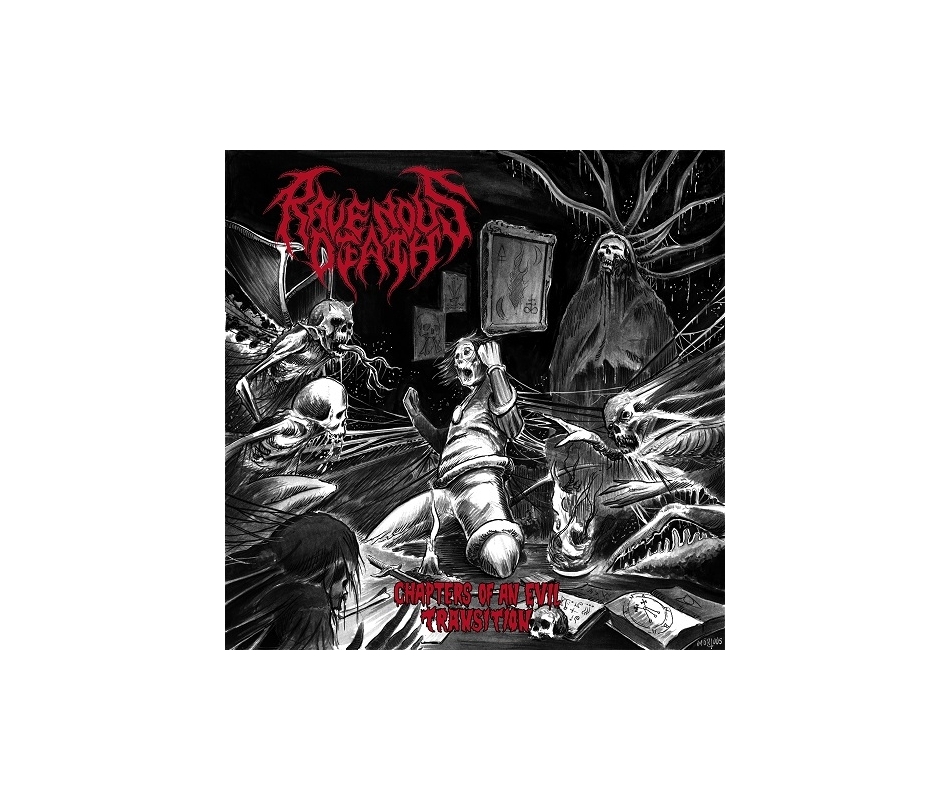 The striking debut full-length by this Mexican band. Hailing from the vast Death Metal hotbed of Mexico, Ravenous Death feature current members of such other bands as Remains, Demonic Manifestation and Death´s Forsaken. The band´s embryo was brought forth in 2016 during the recording of Remains´ third album in Mexico City, when vocalist/guitar player Miguel Angel and drummer Esteban Salcedo toyed with the idea of creating a Death Metal band influenced by Vomitory, Torture Division and the likes. Later on, both musicians shared their vision with lead guitarist Enrique Fray, and the three of them agreed to push the idea forward and carry it out as a side-project due to the commitments they all had with their main bands. Soon after, Enrique and Miguel Angel began writing songs for the newborn abomination, and the three members decided to name the band after a Vomitory song titled "The Ravenous Dead". Fast forward to October 2016, and the recording of Ravenous Death´s debut demo/EP, "Ominous Deathcult", is finalized (although not released as a Bandcamp download until March 2017), including 5 songs chock full of rotting maliciousness that show great poise in combining blasting brutality, crushing heaviness, somber ambience and fierce intensity, with the lyrical themes revolving about death, occultism, blasphemy and other classic topics of the olden Metal of Death. On May 13th, 2017, the band make their first live performance in the city of Guadalajara. For this occasion two new members were recruited -namely, bass player Alejandro Mendez and guitarist Diego Gomez- leaving Miguel Angel on vocal duties alone. After the excellent crowd response, both Alejandro and Diego join the band as official members. Emboldened by this patient momentum, and featuring new vocalist Victor Mercado, at last arrives Ravenous Death´s full-length debut, aptly titled "Chapters of an Evil Transition". Indeed displaying the band´s transition into an evil Death Metal juggernaut, the album absolutely bleeds the molten-yet-mildewed essence of 90´s Metal of Death. Fucking fashion and trends and especially fickle tastes, "Chapters of an Evil Transition" is a gutsfucking time-warp to the days when Death Metal was supposedly "dead", lost in favor of Black Metal, Power Metal or (worse) ill-fated sellout fantasies. In this landscape did many a raw and righteous mini-classic get birthed, and suitably do Ravenous Death continue the proud legacy of Vomitory and Mexican forebears Shub Niggurath, but also especially Sadistic Intent, Seance, old Grave, 90´s Immolation, 90´s Vader and Finland´s Demigod. No more but definitely no less, this is Death Metal by and for Death Metal maniacs: no bullshit and no sellout! Completed by stark artwork courtesy of Mörtuus and mastering by the esteemed Javier Felez at Moontower Studios, allow Ravenous Death to read you "Chapters of an Evil Transition"!